Renzo Ravagnan, an architect, has founded and leads the Istituto Veneto per i Beni Culturali. Since 1995, he has been training young restorers in the field in Venice and the Middle East: a school of expertise for the care of our heritage, and a site for dialogue.

Why a restoration school in Venice?

In the early 1970s, while already working as an architect, I began to reflect on my studies at the Faculty of Architecture of Venice from a different perspective. A misunderstood modernity, which saw development in an often uncontrolled urban expansion was leading to the degradation of both the natural and built environment.

These were also the years in which the debate concerning the protection of our historic centres and landscapes and the methods of restoring works of art was coming to the attention of the community, and no longer concerned merely those involved in the field. 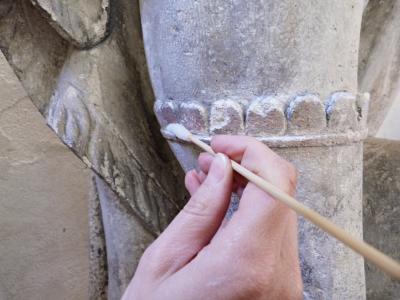 My home town, Chioggia, also has a magnificent historic centre to be protected. I felt a growing need to study antique construction techniques and traditional building materials, and to deepen my knowledge of past architecture and learn the most advanced conservation criteria.

Hence the specialisation diploma in the restoration of stone materials and, some time later, the desire to teach young people, initially through ANCE, the Associazione Nazionale Costruttori Edili (National Association of Builders) in Venice, and then by founding the Istituto Veneto per i Beni Culturali (Veneto Institute for Cultural Heritage), of which I am the director, in 1995. The main goals of the Institute are the training of young people and the conservation of public or publicly used art-historical works.

Restorer and restoration technician: what are the differences?

In 2009, the Government defined the skills and training required for the professions in the field of restoration.
The restorer, to whom are assigned planning and management, receives training through a five-year course at accredited academies or institutes or at the MiBACT high schools. Often, however, those actually intervening on the ground are the technicians who work alongside the restorers. Our three-year courses train these professional assistants. 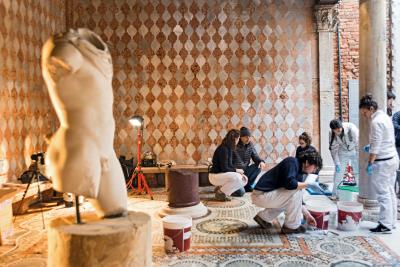 The Institute in figures; training and innovation, employment opportunities...

So far, we have about four hundred students who have graduated from our course. Every year we select fifteen new students for the three-year course, which alternates restoring canvases and panels with stone artworks. This year we added the restoration of archaeological finds.
We also organise shorter specialisation courses aimed at fostering entry into the world of work. For many years, almost all of our technicians found employment in the industry. Then the economic crisis made itself felt and the situation has become more difficult. Nevertheless, there are positive signs of revival. The students – mostly young women – learn the most up-to-date restoration techniques and participate in conservation projects, sharing the critical aspects of our work: expertise and love for beauty.

What is your relationship with public institutions and private committees for the protection of Venice?

The school lives thanks to the funding of the Veneto Region. That is why we have chosen to return to the community all that has been invested in training by starting projects that only concern public artworks or works used by the public and in collaboration with soprintendenze, municipalities, state and civic museums, parishes.
We are part of the International Committees for the Protection of Venice. The chairman of the British Committee, the Venice in Peril Fund, is Lady Frances Clarke and she is also the Honorary President of our Institute. 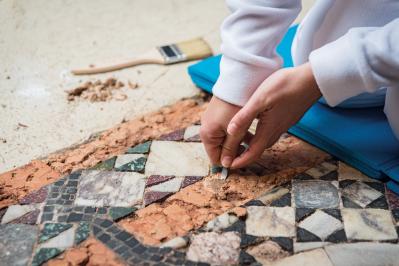 We rely on the collaboration of the American Save Venice Committee, directed by Melissa Conn, with whom we have carried out various interventions, such as those for the chapel in the Doge’s Palace and for the sottoportico of Corte Nova in the Castello sestiere, which is much loved by the few remaining Venetians. Save Venice has for some time provided us with some scholarships, thanks to which we are able to run programmes together with the Polo Museale Statale del Veneto, the grouping of state-run museums in the Veneto, which hosts us in some venues in exchange for ongoing maintenance and specific restorations.

Since the early 1990s, our era has been marked by international terrorism and the tragic declared programmes of "exporting" democracy. The Institute has in the meantime exported its experience to Middle Eastern countries that are dramatically at risk. What results have these cultural missions had?

In the Holy Land we have worked with all the communities: Jews, Christian and Muslim Palestinians, the Greek Orthodox and Catholic Church, with sites in Nazareth, Acre, Jerusalem and Hebron. Strong relationships have flourished as a result, accompanied by generous signs of goodwill. In Nazareth, during the restoration of the Mensa Christi, every day for four months, our twelve students on the site were given a basket of fruit donated by neighbours.
In Yemen, the intention, agreed with the country’s Social Fund for Development, was to start a course open to women, thereby contributing to their emancipation in a very poor land still characterised by patriarchal customs.
We were asked to restore the three thousand square metres of painted ceiling coffers in the Great Mosque, which according to tradition is the oldest in the Islamic world, built in 630 AD. We also worked on the frescoed domes in the al-Ashrafyya mosque of Ta’izz. 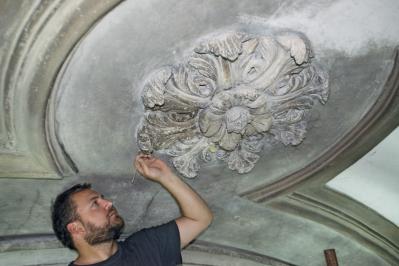 Many of us are nostalgic of Yemen which we got to know before the outbreak of the senseless violence, of which this wonderful country’s humble population are the victims today. The former students from Sana’a and Ta’izz keep in touch with us, inform us, ask us for advice. I’m hopeful and look forward to going back.

What prospects do you see for the Institute, with regard also to Venice and its fragility?

In recent years, the Istituto Veneto per i Beni Culturali has worked on some important projects in Venice. The hours of practical training for us are actual sites. The school is also involved in the mainland at Villa Pisani in Stra.
The last words must be devoted to the students, teachers, and collaborators, because our results are the result of collective commitment, of adherence to the ethics that inspire our work and give it meaning. My thanks go to them.